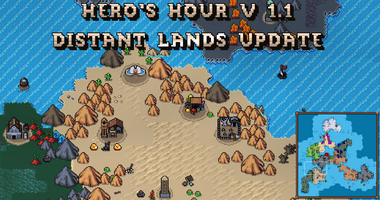 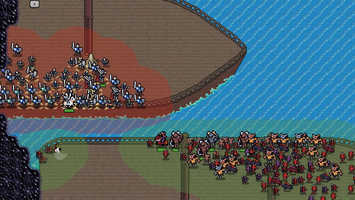 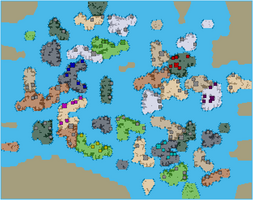 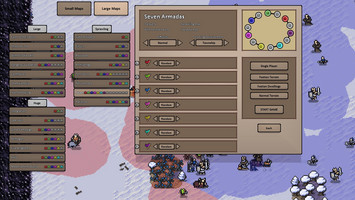 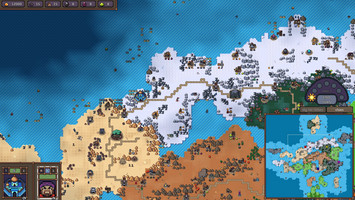 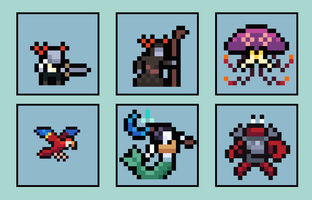 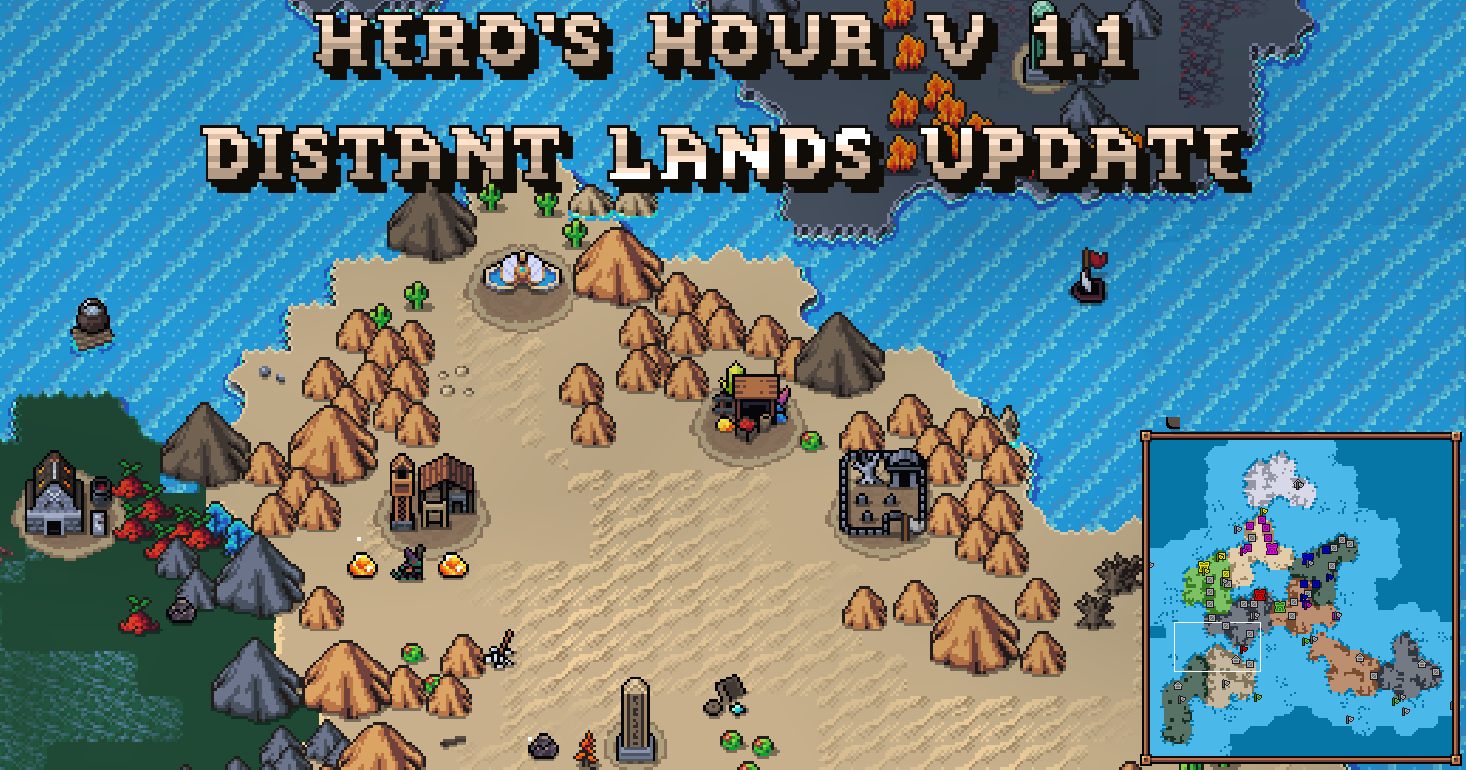 So! Welcome back. It's been a couple of weeks since the Hero's Hour v1 release! That was an exciting time, but it also had been a long while mostly focusing on polish, stability and minor changes. So it became important for me to show that that isn't the normal way of things. Hero's Hour is meant to be a living, breathing game. And thus right after game launch, I steered right into a period of heavy development. Which I am now ready to reveal as:

This update focuses on adding a lot more variety to the Hero's Hour overworld maps. 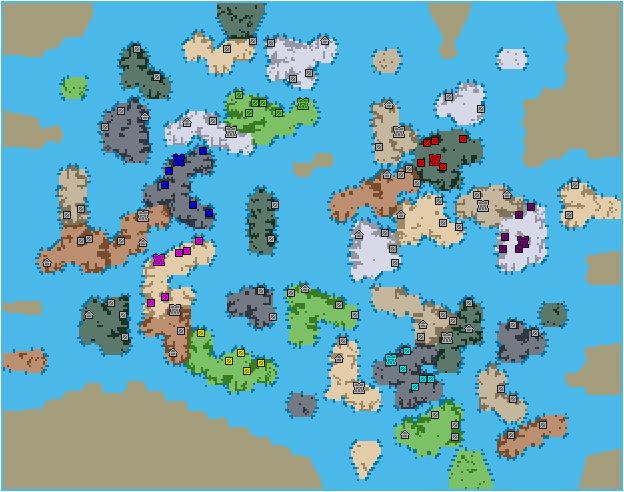 A large part of that is in adding Islands, sea-faring, portals, etc. But there are also new map objects coming. In total, the feature list looks as follows:

What ended up being the largest feature was seafaring. I mean, sailing was simple enough. But then you needed docks, and all the mapgen related changes to allow placing objects specifically on the coastline. Then you need something to do out at sea. Then you need some way to do battle on the sea. It kind of spiraled out of control. 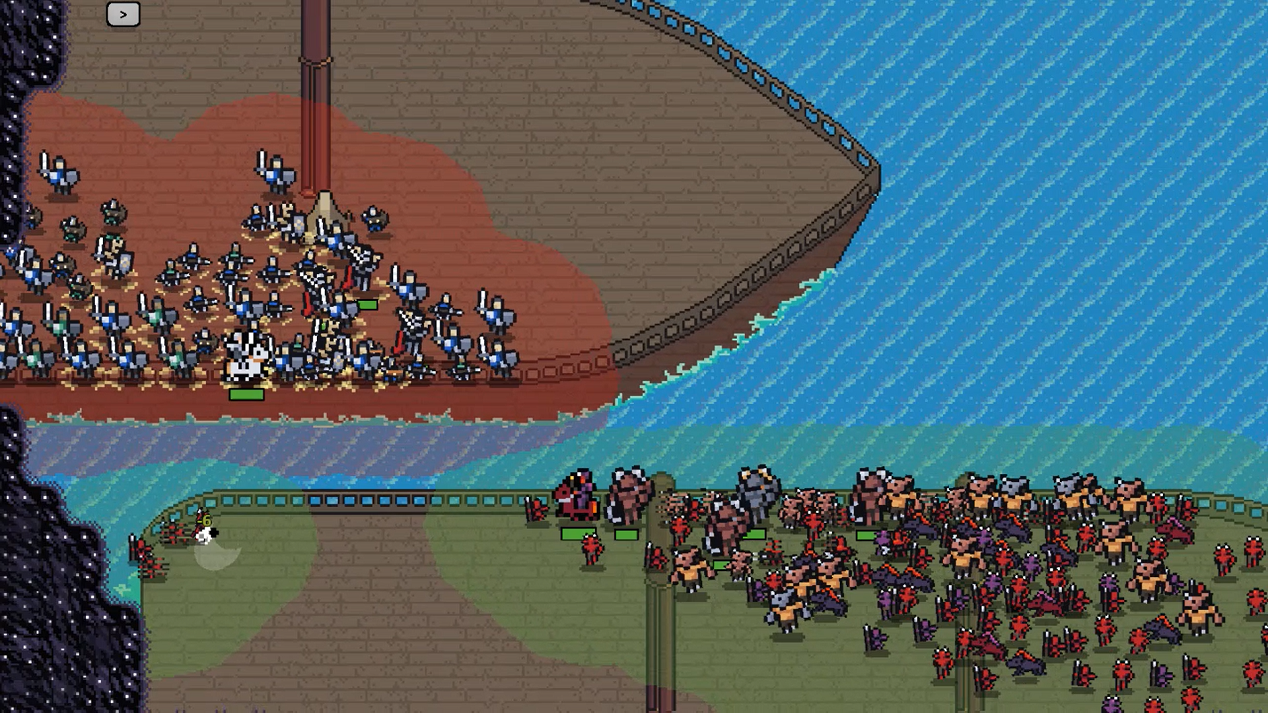 But that's also pretty cool, because I'm quite proud of a lot of the content that has come out of it.

What actually was the most challenging part was pathfinding. It was super important for me that you could click anywhere on the map, and the pathfinder would automatically understand the ability to buy a boat, get into it, sail across the sea, and land on the distant shore - for instance. Or that you could go through a portal to get there faster. This was moderately difficult - I'm really proud of my coastline solution, for instance.

What was much worse was how slow pathfinding became. Maps can be up to 4x larger, more of the map is traversible due to the open seas, and each tile has to check for portals etc. So a lot of time ended up being devoted to doing the optimisations so that the new more complex pathfinding doesn't slow the game to a halt. 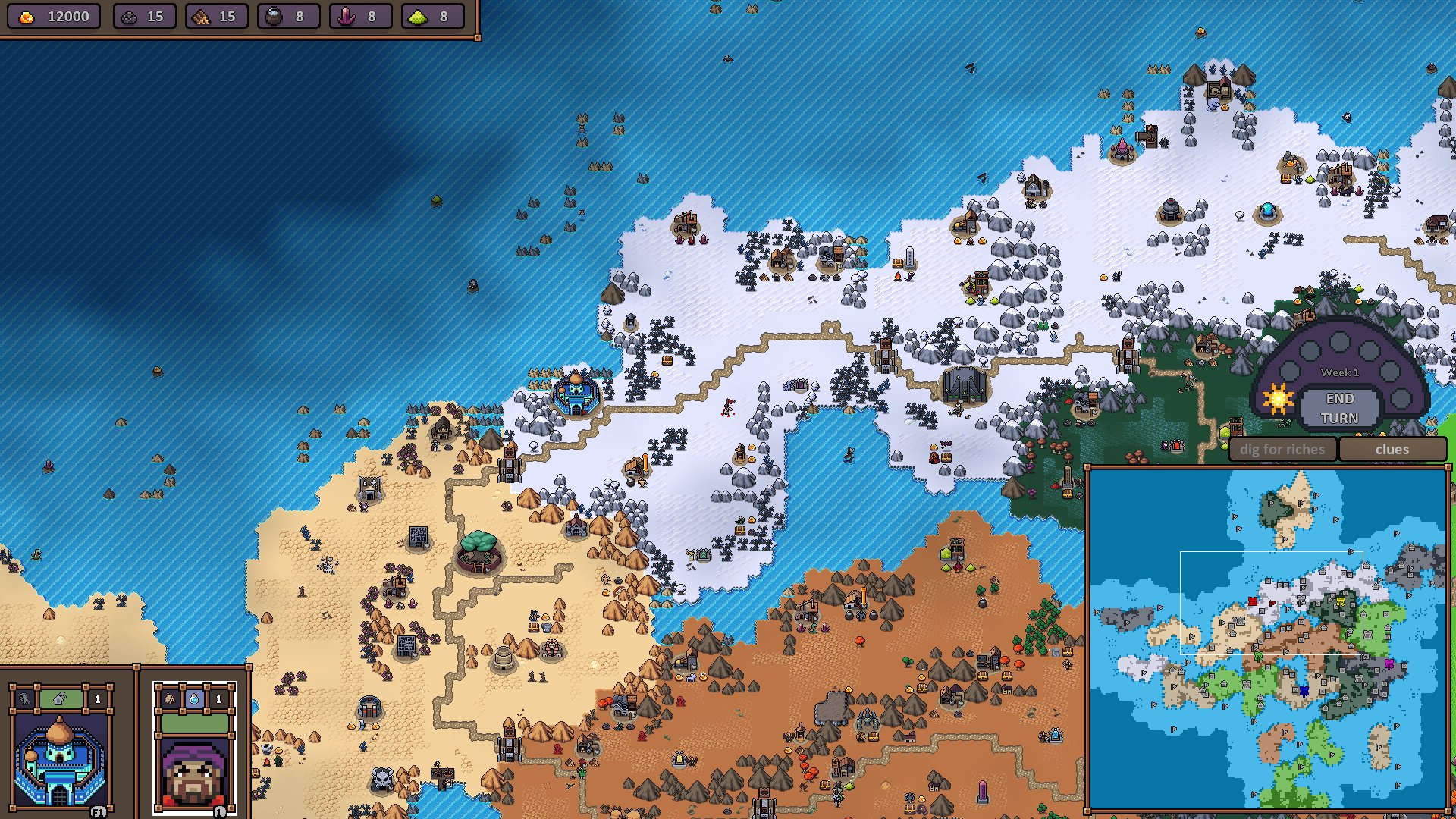 Anyway, though the list above seems quite expansive, there's actually even more content than really described. Take a look. 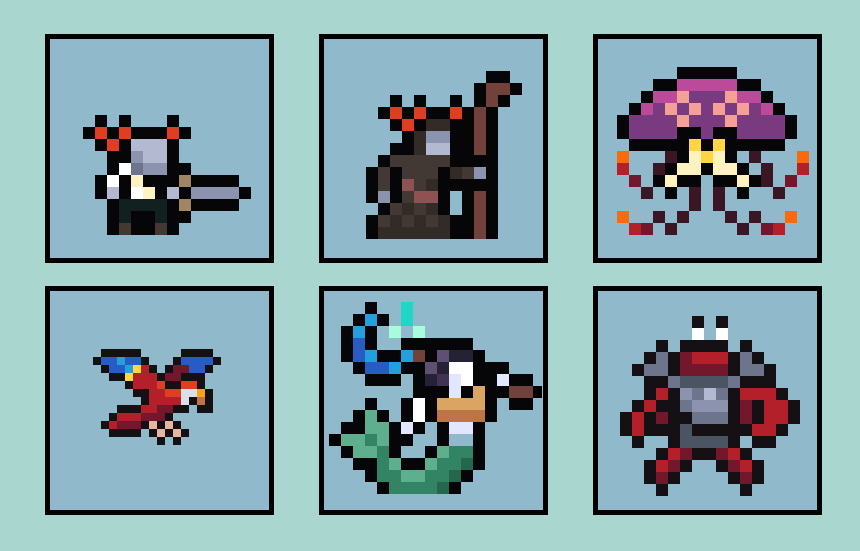 So let's talk about the beta. Just today, I uploaded the first v 1.1 beta. You can now play all the features listed just above this picture. But there's still more to come. All these six units (plus many more) won't come before v 1.1 is finally completed. There will also be more adventure map buildings. So, in a way, v 1.1 is only half done.

Nevertheless, with the amount of improvements made recently, it felt weird to continue keeping people out. I sort of also need some feedback on game balance with such sweeping changes. Finally, there's sure to be some rare bugs that wandered through my net, and I'd love if you could help me catch them. 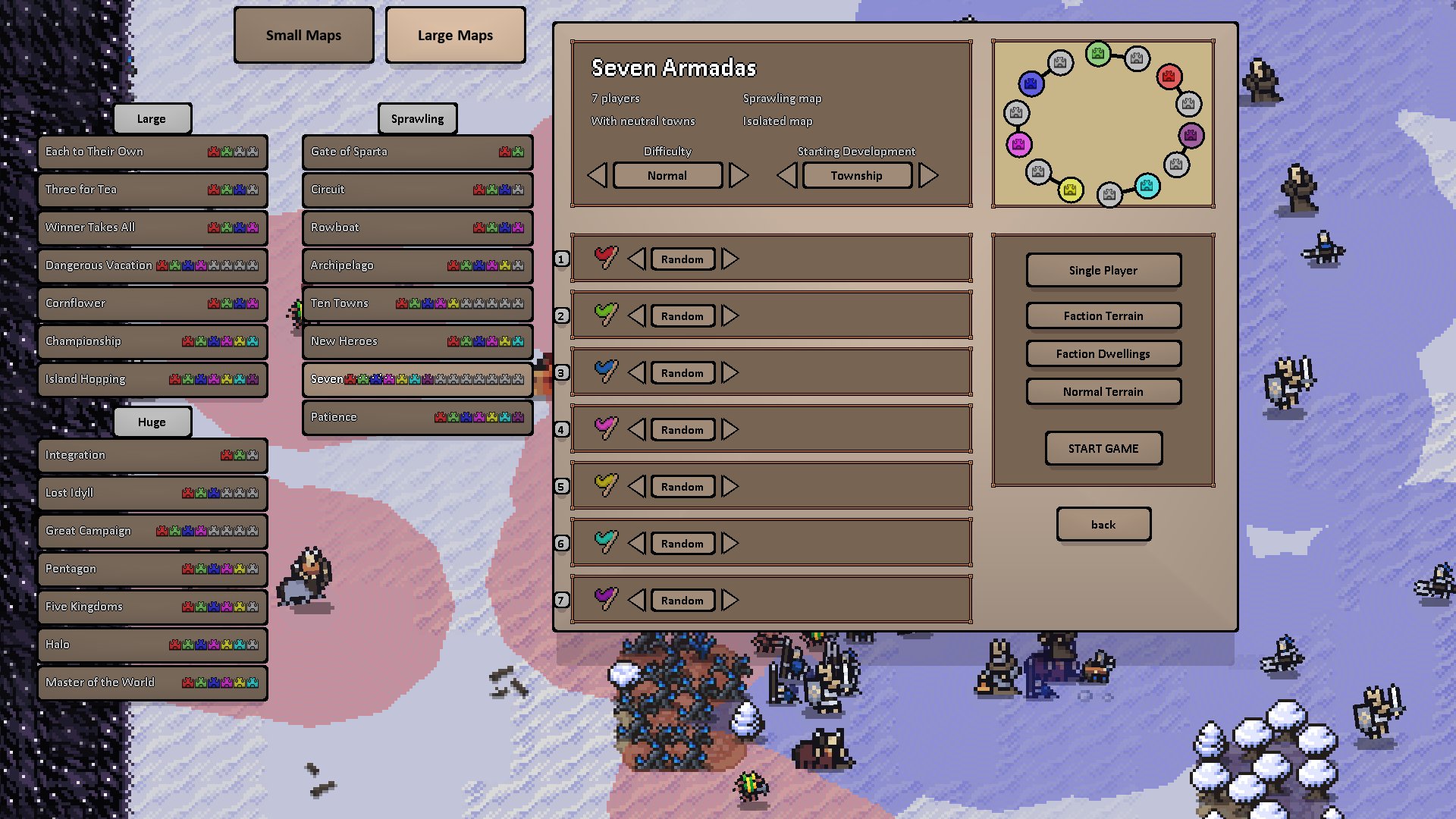 I'm sure I've already announced that Hero's Hour is coming to steam, but I'd like to add a few words. The plan is to continue development here on itch for a couple of more updates. Then around v 1.3 or something like that, doing another period of polish and stability fixing, before releasing the game there. But you can still go and wishlist the game on steam today.

I think I'll leave it at this for now. Expect a non-beta release for v 1.1 in a week or thereabouts. Until then, I'm all ears for feedback and others. Write it here on itch, contact me on the discord, on twitter, or even on email at thingonitsown@gmail.com.

Hey, excited to try the beta.  I hope you will keep releasing here on itch even after the game is available on Steam, personally I don't use Steam due to the DRM.

I don't have any plans to discontinue itch Io as a platform, don't worry :)

When will the current beta be ready for full release?

My plan was Sunday, then Monday, then Tuesday. I still hope today will be the day.