Once upon a time, Hero's Hour had weekly updates, a format I have since then strayed from because doing polish takes foreeeeever. Luckily, this week I focused on some much more specific features, meaning that there's a pretty large update already ready for playing.

It's uploaded as a beta. This is solely because I don't feel 100% sure about unit balance. It should be as bug free as the previous build.

Let's look at the features! 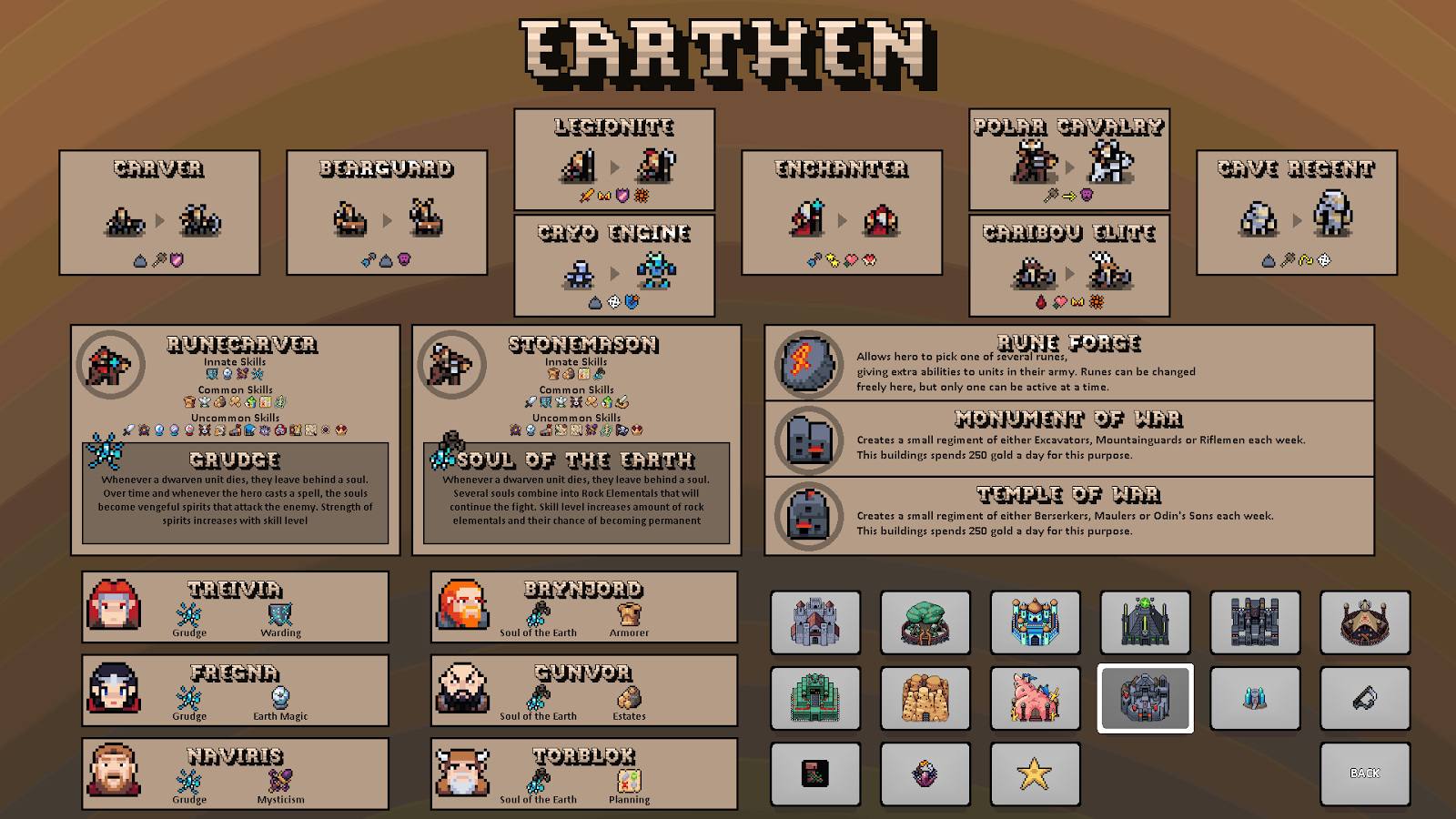 NEW FACTION! Yay, dwarves in Hero's Hour! The projects main artist made these really cool assets (https://iknowkingrabbit.itch.io/has-dwarves), so I scrambled to get them into the game as soon as possible. As such, we now have a 10th faction in the game.

The Earthen are better than any other faction in mustering units through their Monument of War and Temple of War. Since they're so offensively strong, I found it important to give them hero skills that instead played to their defensive side. Thus the hero skills trigger by losing units - this encourages you to take more challenging battles. And if you try to play without losing any units - you can do that quite fine too - but you don't get an added bonus from your hero skill because you don't really need it. 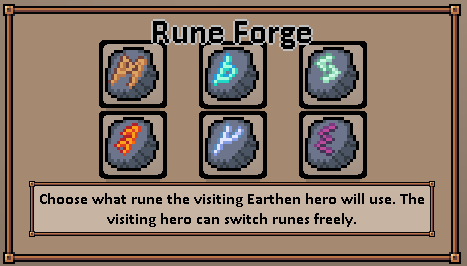 Runes are the main mechanic of the dwarves and it's a really strong and deep mechanic. You get to choose between six runes:

Each Earthen hero can only keep one of these runes active at any given point. Heroes get to pick their runes at the Rune Forge once you build it in town.

I could go through each unit in the Earthen roster, but it's better you play them and try for yourself. 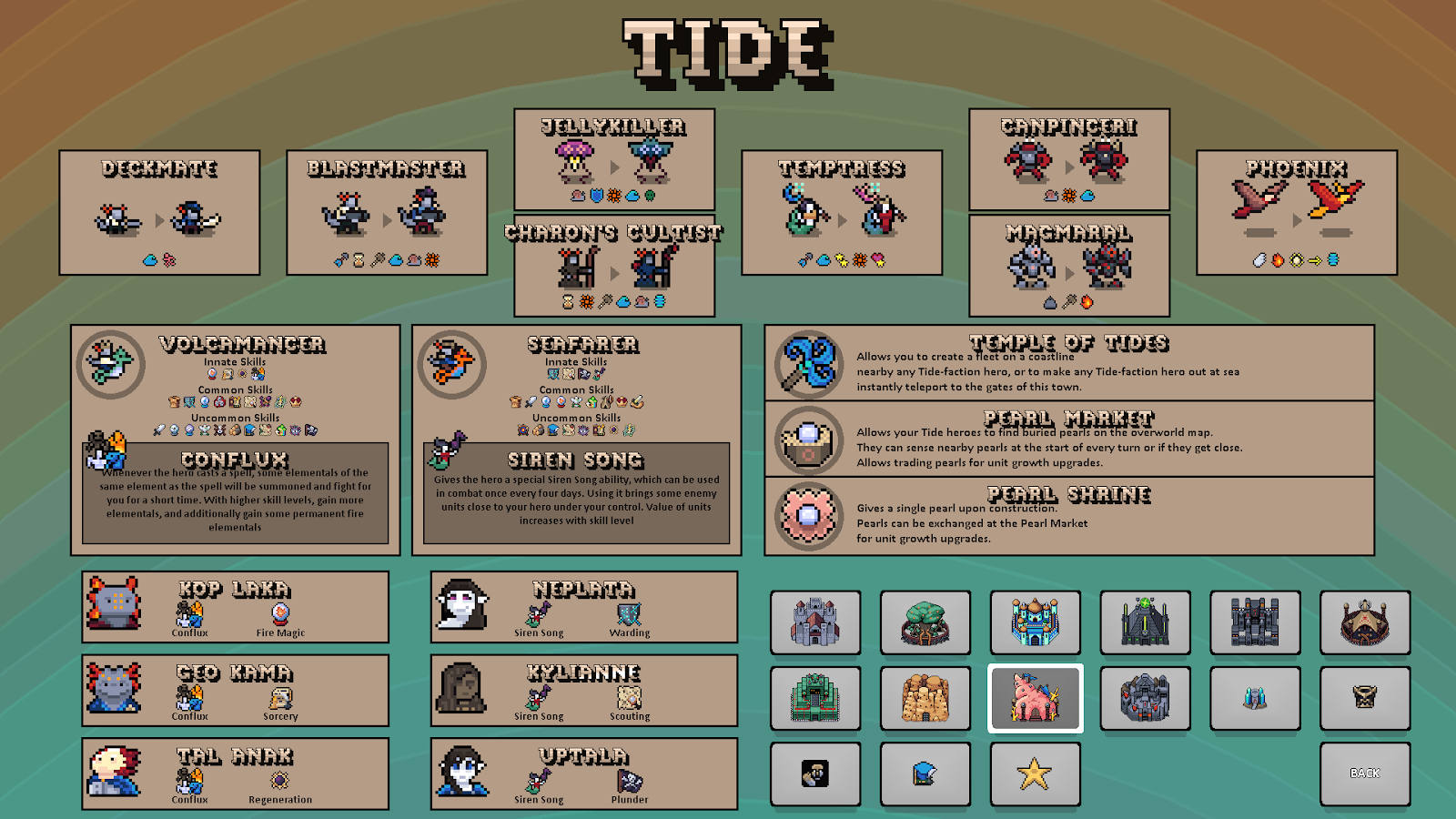 Small intermission to remind you of the other faction added last week, Tide. Just in case you missed it. We're now up to 10 factions in total, each of which has three unique buildings, two unique hero skills, and of course their faction line-up of 8 units.

YOU HEARD THAT RIGHT! All factions have now been given an additional unit! These new units are available as optional sidegrades to current units. I've also gone and retouched the different unit progressions.

Order has been given a new set of units, Strongarm and its upgrade, Dragonslayer. The Dragonslayer deals significantly more damage to large units since it always deals an extra 10% of the enemy unit's max health as damage. They absolutely melt dragons. They're an aggressive alternative to the Knight.

Another change is that now instead of choosing between the Friar or Jouster, the choice is now between Jouster and Paladin. This is to make sure that you never have to choose between a ranged and melee unit.

Wild has been given the new unit Avenger and its upgrade, the Ritualist, as alternatives to the Deer and Golden Buck. These are aggressive units that specialise in staying alive. They have "tactical retreat", allowing them to flee when they would otherwise die and return after combat. Ritualist also has life-steal.

These units show off the less peaceful side of the Wild faction.

Arcane has been given the Ice Sculptor and Cryomancer units as an alternative to the Golem and Automaton. Golems were always pretty sparse - but Cryomancers and Ice Sculptors summon two small ice engines when they enter combat, meaning that each unit is actually three units! And  if the small ice engines die, you don't lose anything. Neat!

These units are the second human unit in the Arcane faction lineup. Just to make clear that Arcane is a faction of humans - though they do prefer to put other creatures on the front lines.

Decay gets the Bonewyrm and Thanatos as new top tier units. These are good crowd control units with their flying and charging. Also, I always loved Bone Dragons in the HoMM games, so I wanted them in this game too.

Several other changes. You cna now get both Vampires and Liches. Instead you'll have to pick between Zombies and Tarantulas. Also also, the Grim Rider and Lifebane no longer summon zombies. Instead they deal extra damage to large enemies, the whole 10% of their max health thing that Dragonslayers and Deadeyes also get. Thus they get quite a unique role. Finally, Liches no longer have the Blaster AOE skill and just have normal large ranged attacks - but these now summon skeletons for each enemy hit!

Pyre gets the Succubus and Mindmelters. These have the charm ability introduced with the Tide faction Sirens. These steal control of units that would otherwise die. Succubi and Mindmelters are melee units helped defensively by dodging and warding. These are sidegrades to Efreets.

Oh, right, Warding. That's a new unit skill which has been given to several units around the game. Warding now also gives spell resistance. Both the unit skill and the hero skill version. Fun!

Horde gets the Bloodletter and Bloodwarpers. These are tactical late game units that work great together with small units. They get Blood Aura, making them stronger when friendly units die around them - and the Bloodwarper also is able to resurrect fallen units, working the same way a First Aid tent would.

These are the first introduction of Blood Magic, something that is meant to be central to the faction of Horde but not really portrayed explicitly. Basically, Trolls and Avalanchers aren't actually different creatures than Goblins, but merely Goblins morphed by Blood Magic. The same is true for Cyclops and Behemoths.

Enclave gets Witchzards and Storm Hexers. These turn enemies into frogs. I don't really know what else there is to say. They're good against big units.

These units were chosen for two reasons: To get more melee magic-users in the game, and to get more female coded units in the game. Also, the Storm Hexer looks super cool.

Lament gets the Mutant Trog and Monster Trog. These are more aggressively-aligned side-grades to Ophidians. These units were added to make the Troglodytes more well-represented among the lineup of the Troglodyte faction. Also, you must admit, that pun is golden.

Tide gets a new unit, the Geyseral and Magmaral. These were added to continue tieing together the themes of water and fire, which are the central themes of Tide. 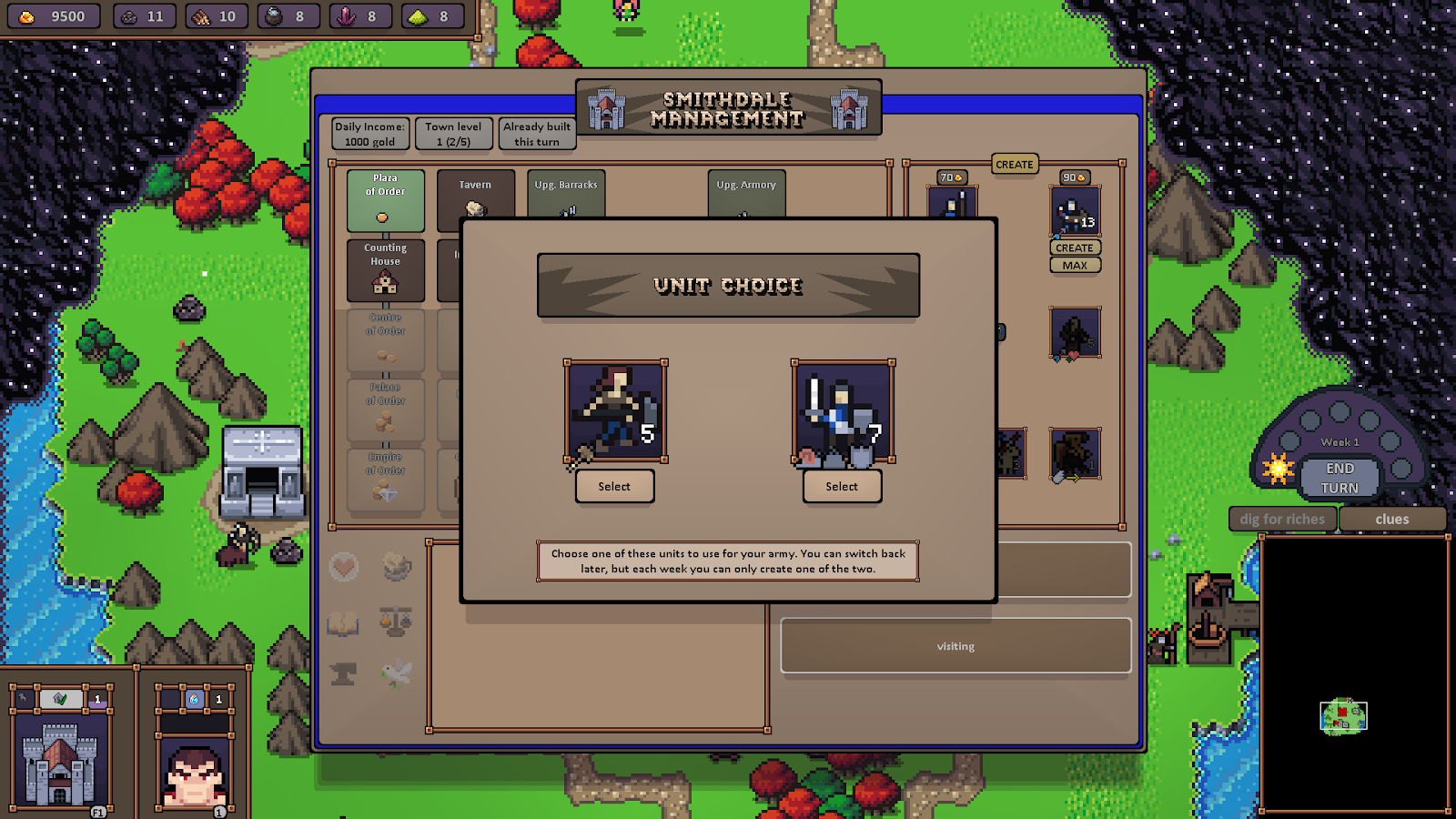 More choices. Instead of these sets of mutually exclusive units taking up two building slots in town, they're both hired from the same dwelling. You get this nice new dialogue box as seen above. You can also switch back later if you want.

Fort, Stronghold and Citadel now give a growth bonus to a single unit of your choice instead of a small bonus to all units. This allows more choice in how you put together your army. 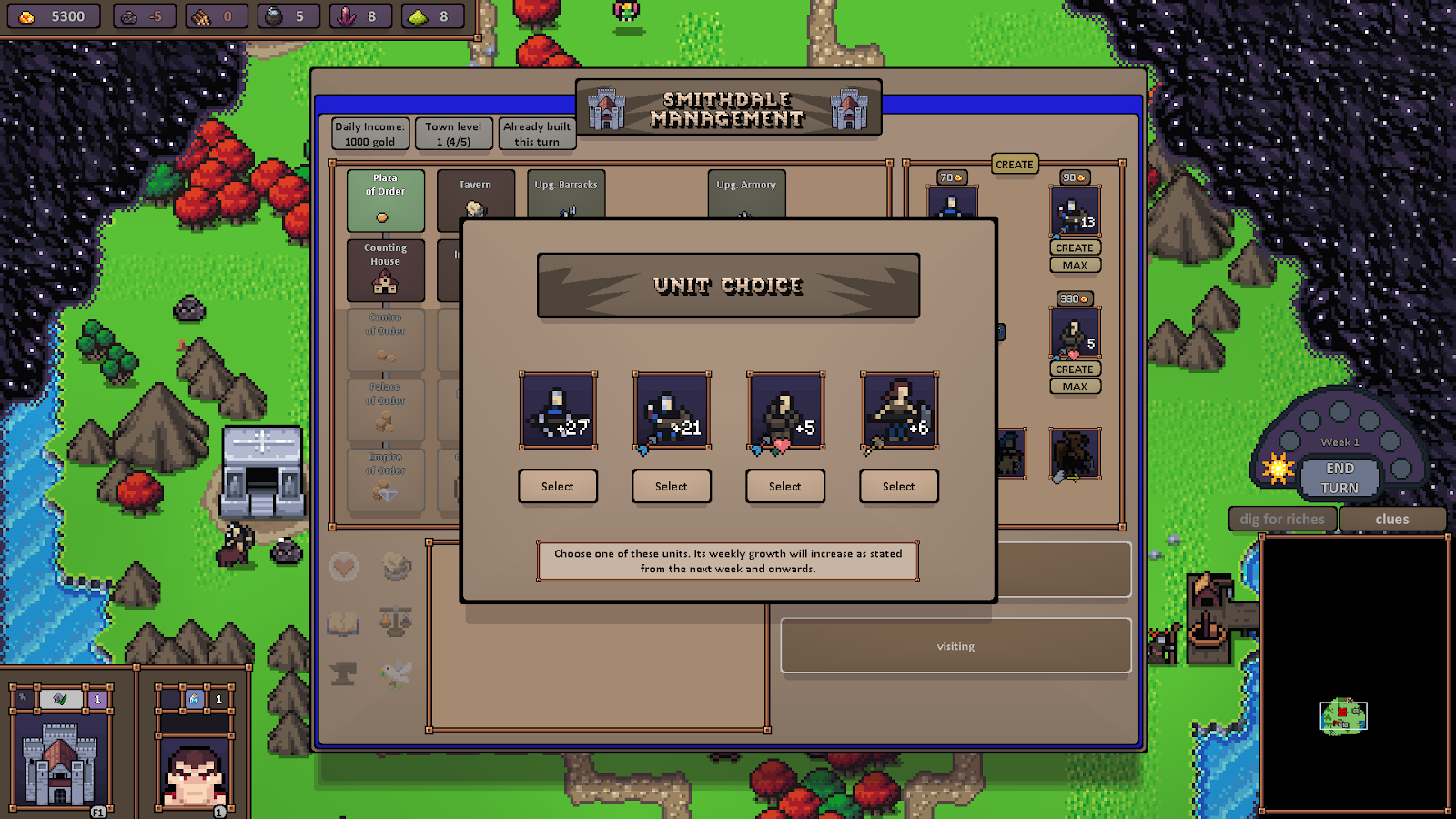 These boosts are actually pretty large - in most cases bigger than they were before. Forts will only allow increasing dwelling growths of constructed dwellings. Keep that in mind.

I'm all out of features now. Try the beta! Give some feedback about balance.

Oh, btw, all units now cost 50% more. Um, no clue how that changes the game, so please try it and tell me you hate it so I can undo that again.

wait a second, WILD has a DWARF in it? So it is like homm3 then. GIVE US OUR MOUNTAIN GUARD, THEY CANT HAVE IT.

The mountainguard has been made a neutral unit in v 1.4, replaced by wolf. Now there's 6 dwarven faction units + 6 upgrades and 8 neutral dwarven units. Hero's Hour does not hate dwarves.

when i first saw this game half a year ago i was like "Oh.. it is like HoMM; it also hates dwarves." so im happy to see they've been added even if they were maybe the last faction to go in

You are releasing new factions so fast :D And the updates to existing factions! Great job man. I was always upset about only 9 factions in HoMM 3. You have creative ideas I hope there will be even more. By the way when game will be available on steam?

Yea, this went fast bc IKnowKingRabbit did new art at an unexpected time - and it made sense to do another faction when I had just gotten through the thing just before. 10 factions is an absurd number and I'm not going for even more for a while now :P

Ten sounds enough but I keep my fingers crossed for more :)

Earthen faction is pretty strong to me, my strategy skills are not that good and I found a way to destroy impossible enemy for the first time haha. Might found a really good build or something

By the way I was playing a hot seat game with two friends and the game seem lagging more for some reason. Maybe there was something going on unoptimized, please take a look

oh, there's something for sure. It should be fixed in the v 1.4 coming soon.